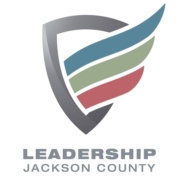 31 students graduated in the 31st class of Leadership Jackson County after a very challenging, yet successful, year. These students represented a diverse set of leaders from various industries throughout the county. Despite the unconventional nature of most of the sessions being during a pandemic, the class still received the full Leadership experience.

Fortunately, the class was able to participate in sessions that Leadership classes have been experiencing over the last three decades and more. These sessions focused on a wide variety of topics including state government, education, economic development, industry, small business, environment, public safety, and others over the course of nine months.

Throughout the course of the 2020 Leadership Jackson County class, participants received an overview of how each municipality in the county is run from tourism to industry. Due to the pandemic, many of the classes had to be modified to make sure the participants could stay sufficiently distanced and in good health. This change in the format opened up new innovative ways of holding Leadership Jackson County that may influence how the program is run in the future.

The class concluded with a graduation at the Hilton Garden Inn in Pascagoula. Please find the list of 2020 Leadership Jackson County graduates below: 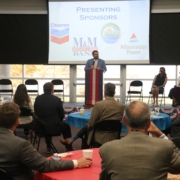 The Jackson County Chamber of Commerce hosted the Annual Membership Meeting for 2020 at the beautiful Pelican Landing in Moss Point. We appreciate everyone who made the event a success this year. We want to say a huge thank you to our outgoing chair, Clayton Legear, and a big welcome to our new chair, Christian Hartley! We were pleased to present Debbie Anglin with the Jolly P. McCarty Award of Excellence for 2020 for her amazing selfless work and leadership. Please enjoy the photo album below: 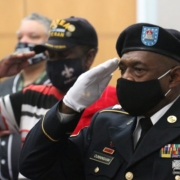 The 20th Annual Veterans Day Program hosted by the Jackson County Chamber of Commerce proved that even a pandemic couldn’t hold back the appreciation this community has for its military men and women.
This year’s event was held at Pelican Landing in Moss Point. It brought together service men and women from across Jackson County, including keynote speaker, Christy Wheeler, Retired Commanding Officer of the United States Navy.
The moving ceremony honored and remembered numerous veterans from almost every conflict since World War II.
Please take a moment to browse through the photo gallery below, then scroll down further for the bio of this year’s keynote speaker.

Commander Christy Wheeler is an Air Force dependent, with overseas tours in Morocco and Spain. Commander Wheeler served on active duty in the United States Navy. Her military career spanned 20 years, culminating in being named Commanding Officer of Naval Station Pascagoula. After retirement, Commander Wheeler returned to Mississippi to serve as a caregiver to her father-in-law. She later accepted a position as Executive Director of the United Way for Jackson and George Counties. After great success fundraising for the United Way, she became City Manager for the City of Gautier just in time for Hurricane Katrina. She excelled in the operational needs of the city’s emergency response and recovery efforts. She is now happily retired again.

Commander Wheeler taught school for 7 years in Florida and was an educational consultant for the Florida Department of Education for several years. She is married to Nick Richards, CAPT USN-Ret and they have three adult children, Larinna Richards-Cothren, Rhiannon Richards, and Dell Lopez.